‘HOW TO MAKE YOUR MOVIE’ WITH FILMMAKERS FROM AFM

In case you missed the ‘How to Make Your Movie’ panel live from AFM last year, with our hosts Giles Alderson and Ian Sharp, and guests Gemma Hurley and Jed Shepherd; we have released it as a masterclass in filmmaking this week.

Jed’s mum is very superstitious and is ‘into’ various mythologies. “She instilled in me that monsters and ghosts are real and you have to be careful of those creatures. So I spent my formative years researching them.

I watched horror to protect myself. A lot of my ideas come from childhood fears of having to meet these creatures and what I would do in that situation.”

“Oftentimes VHS has never been converted to DVD, so there are lost stories out there. I get a lot of ideas from forgotten films.”

Gemma who enjoys working not only in horror but also in “fantasy, sci-fi and all kinds of weird – anything that makes me feel wonder or dread is my sweet spot” says that it’s really difficult to come up with original ideas so prefers to bring an authentic idea or concept to something that might already be out there.

Trying to “create something that resonates with something in me, like a feeling.”

Giles who enjoys collaborating said that he preferred writing with other people. “I enjoy the camaraderie and I enjoy the way we talk and communicate and have fun with the idea.” He said that it is also helpful when you get stuck, to have someone to bounce ideas around with.

During lockdown, Gemma and Jed co-wrote Host with Rob Savage. For Gemma, co-writing the film was some of her “favourite memories. Working a hundred percent wonderfully and everyone’s on the same page. We only had a certain amount of time to do it, so there was no time to second guess or to go down any rabbit holes.”

She said that it has to be a harmonious collaboration though because when the balance is off and when a hierarchy is involved, it can become a bit more complicated.

“It depends on the makeup of the (writer’s) room. If there’s respect and if everyone’s steering in the same direction” it can work, but if “they’re pulling in different directions that can cause tension. It’s a mixed beast.”

Ian believes that it is important “to come to everything in this game with humility. Every movie that you’re involved in, all television projects are always different.”

Don’t be afraid to admit that you don’t have all of the answers, but be prepared to learn.

Meetings are great for establishing relationships, and not just for pitching. Jed says that it’s important to remember that “you’re not selling a project, you’re selling yourself.”

If you get on with the person and create an organic, natural relationship and are not just “begging them for money, they will feel more inclined to work with you, because working with someone in film is a time investment. Having a strong relationship that you’ve built over time is so important.”

Ian agreed, saying that it’s also important to “have a basic understanding of everything in this industry. You need to arm yourself with experience. And build your allies. It’s a money-making industry.”

And that is why they call it the film business. Giles thinks it’s “really important to hold a boom for your mate’s film, act in a thing. If you want to be a director, learn to act, learn to edit.”

Advice to Their Younger Selves

For more from Gemma, Giles, Ian, and Jed, listen here.

The Filmmakers’ Podcast 10 hours ago

Which one do you think is a lie? @LucindaRhodes: 1. played super bitch Jodie Stone in Sky One’s Dream Team. 2. was originally the 6th Spice girl (Fiesty Spice). 3. worked for The News of The World managing their Cheerleading squad. #filmmaking #podcast #twotruthsandalie https://t.co/vrvzZaTude 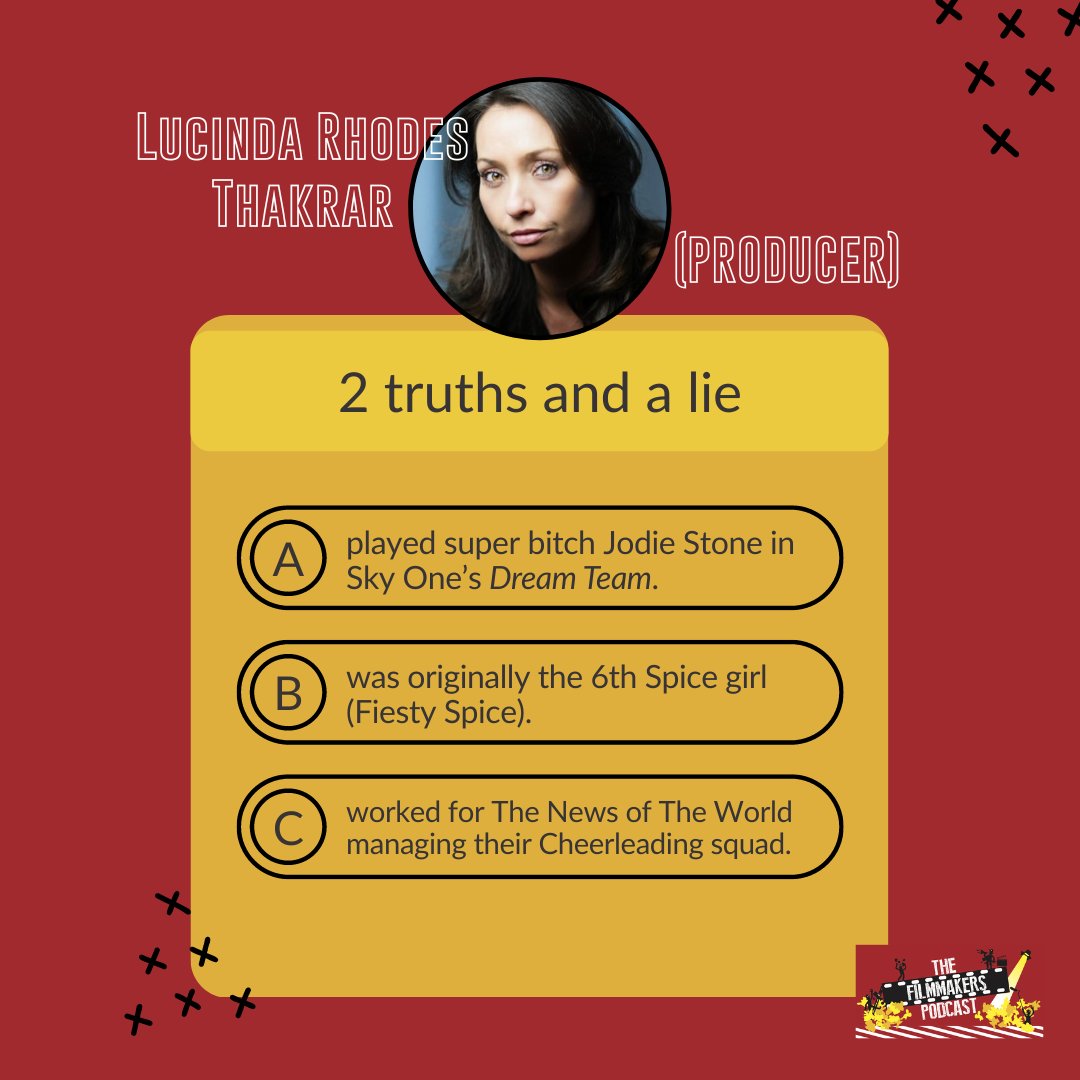 RT @DirDomLenoir: Our brilliant episode is up and full of top info!

RT @Impact24PR: Learn about Jonathan Benefiel’s career, from starting as an actor to becoming an executive producer, as well as his new fil…